Cases of pneumonia are now rare and calf growth rates exceed 1kg per day since a temperature-controlled calf unit, similar to a chicken coop, was erected at Beckside Farm, Cumbria.

The Morris-Eyton family’s decision to invest in a new calf shed came when they grew the herd from 250 cows to 400 in 2019.

The original steel-framed calfskin building was already creaking beneath its seams. With more heifers retained for breeding, expansion began to affect productivity.

Patrick Morris-Eyton, who farms with his father, Robert, and mother, Rowena, talks about the new construction.

When did you invest in the new shed?

We started the building in April 2021 and it was completed at the end of June. 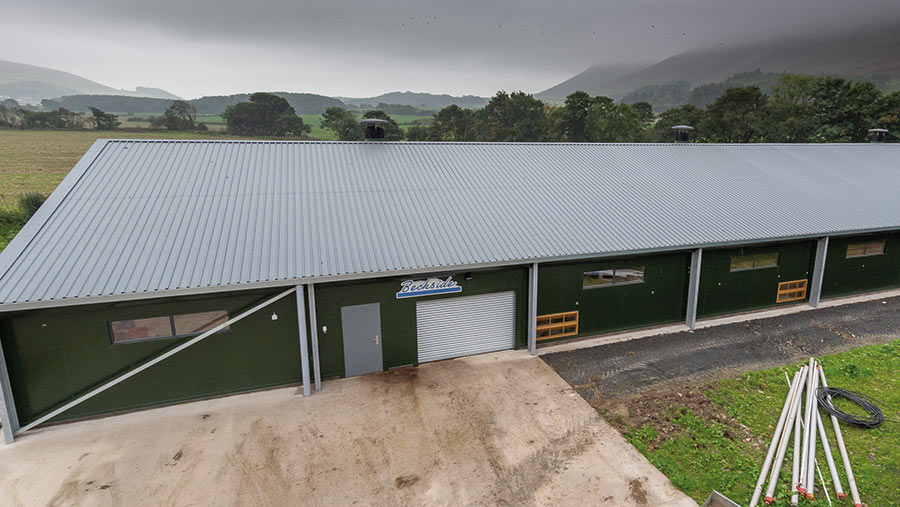 Why did you invest in a new shed?

When we expanded the dairy, we increased the number of cows by 150 and kept a lot of heifers – we were calving 200 heifers a year.

This put a lot of strain on the existing building. The new facility can accommodate 136 calves, compared to 75 in the old barn.

How did you design the unit?

We knew we wanted an air conditioned unit due to the high humidity – we get over 1500mm of rain a year.

However, due to Covid, we were unable to travel to watch a similar unit as there was nothing of the kind that we knew of in the UK.

Who participated in the construction?

The shed was manufactured by Powells in Leominster, Herefordshire, who also manufactured all internal fittings such as enclosures and doors, although these were designed by us.

Ventilation and LED lighting were from JF McKenna, power stations from Holm and Laue, and electrical was done by Dan Taylor.

Tell us about the build specs

The building is 18m wide x 54m long and was designed as a steel broiler shed. For this reason, all steel supports are on the outside for easy cleaning.

The walls are insulated with 100mm of insulation, the gables 150mm and the roof 200mm.

The LED lighting is on for a 16 hour day, then dims and turns off completely at night. It creates 200 lux at calf height.

The shed has 16 individual all-plastic slatted pens that are covered with straw. The slats are from Rimco. Each enclosure is 2m x 1.5m, double the Red Tractor specification.

Calves are housed in individual pens until they are seven days old. 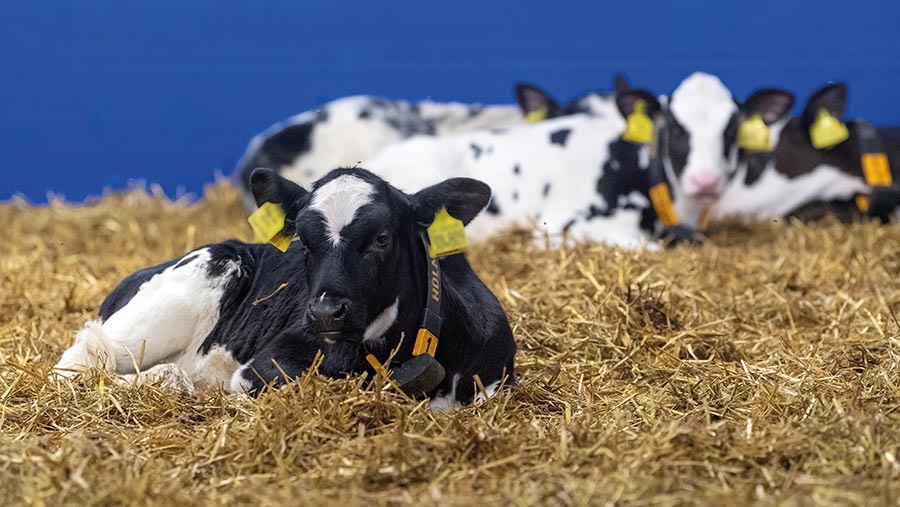 The shed also contains six solid-sided group pens, each measuring 12m x 6m and able to house up to 20 calves aged seven to 75 days on an all-out-all-in-one basis. 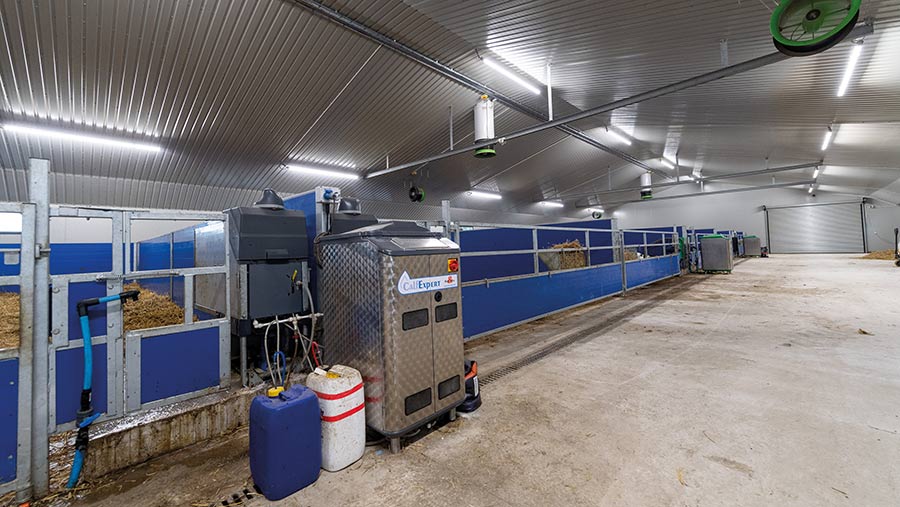 The floors are solid concrete with a slight 2 degree slope towards the middle of the enclosure, where there is a central drainage channel.

The drain pipe has gravel on top, which helps filter straw. This flows directly into the lagoon.

The rear half of the pen is covered with fresh straw every two days.

We also decided to raise the feeding area by 20 cm to avoid the accumulation of straw. The raised area is slatted for ease of cleanliness, with a sump housed below.

How do you feed the calves?

They are fed individually with their mother’s milk for the first three days, then switch to a calf milk replacer. They are fed twice a day. 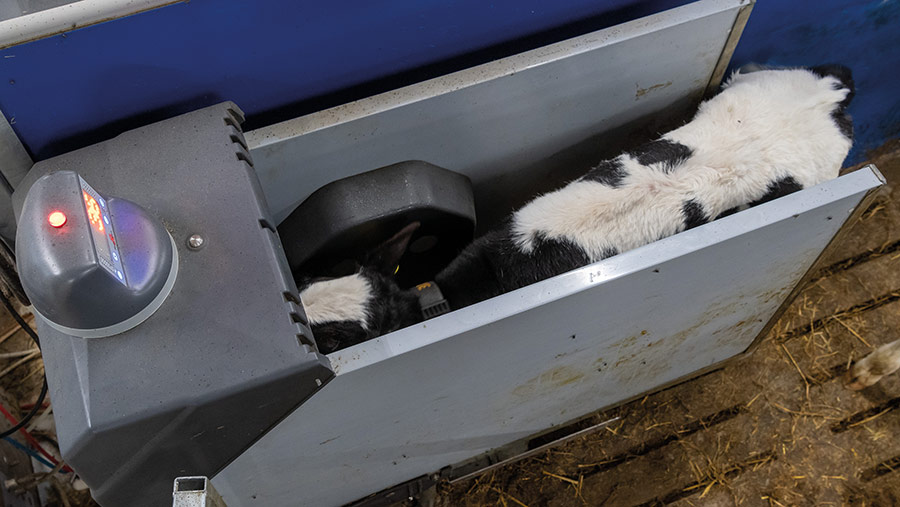 Calves are fed milk replacer using automatic feeders. We have a Holm and Laue Calf Expert feeder with a hygiene station that weighs calves on entry and tracks their growth rate.

The feeder also cleans the teats between each feeding. It cost around £20,000, but we got a small campaign productivity grant, which paid 40% of the price.

The remaining feeders are older Holm and Laue models that automatically mix feed to a specific feed curve for heifers and veal calves – which are housed together.

How is the shed ventilated?

It is ventilated using a negative pressure system. This means that fresh air is drawn in through four automated vents on the side of the shed.

The solid boards on the facades of the enclosures then force this cool air to mix together, along with four circulation fans, and the three chimney fans in the roof pull in the air.

This means that there is a continuous flow of clean air through the building. It also means you don’t need the stack effect, which can be difficult to generate due to the size of the calves.

The main passageway is 6 m wide, the width required for good air circulation.

The heat comes from the heat exchange unit in the living room and the electricity from the farm’s hydro.

What was the initial budget and did you stick to it?

What is your favorite feature?

The ventilation system. We don’t have the same cold and heat stress that we had in the old shed.

What was your best buy and why?

We love automatic calf feeders, especially the newer model, because we can keep track of all calves’ weight and milk consumed.

Did any aspect of the design help facilitate management?

Ventilation has not only improved animal health and welfare, it has reduced bedding costs as the improved humidity means the straw stays drier.

In the old shed we used one bale every other day for all the calves, and now we use two bales a week with more calves.

Yes massively. Pneumonia was a real problem in the old hangar. As soon as it rained, we received cases of pneumonia representing approximately 25% of the calves each year.

We no longer use anti-calf vests and we have stopped vaccinating against pneumonia.

Have there been any teething problems?

It was a little tricky to get the ventilation system right, and the individual pens need more air drawn in than the large group pens. However, we are in the process of tweaking it.